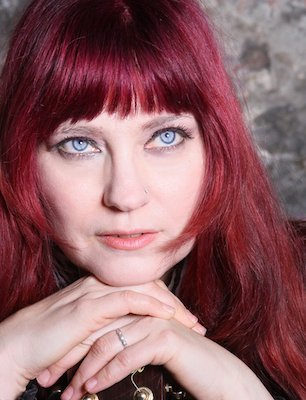 "To me, music is a way of communicating those things that are almost impossible to convey: not just my feelings, beliefs and dreams, but the spiritual, immaterial, infinite feelings of love, passion, sorrow or longing... it's also my way of working through my feelings.... it's a form of healing."

Singer-Songwriter and multi-instrumentalist Tabitha Elkins grew up in the hard streets of Trenton, New Jersey. Despite her harsh surroundings, she developed an interest in many types of music, teaching herself drums, guitar and keyboards. After moving to New York City as a teenager, she was involved in New York's indie rock scene, and drumming in a punk band, living in a squat on the Lower East Side and writing and performing her own music on the side.

Later, after taking some music courses at a local Community College, she won a coveted scholarship to study Classical Composition at New York University (with Ruth Schontal); after one year, she left NYU and later transferred to the College of Staten Island. While at CSI, Tabitha studied jazz with Michael Morreale and performing her original compositions with the CSI Jazz Ensemble, and with a smaller group at student performances. Tabitha also became assistant News Director of WSIA, Staten Island's independent college radio station, hosting her own weekly radio show.

Finishing her studies in 2000, Tabitha moved back to Manhattan, where she became a fixture at jam sessions all over town, and started gigging with her newly-formed Quartet in various venues in the New York region, including Cleopatra's Needle, Downtime and Tagine. During this time, she became actively involved in the Worldwide Jazz Conspiracy's "NYCJazz" newsletter, contributing articles, reviews and her own column. In the Summer of 2002, Tabitha wrapped up her debut CD, "Snowing in July". The CD features classic standards such as "Mood Indigo" and "Lover Man", as well as originals. Living in New York during the aftermath of 9/11 convinced Tabitha it was time to move on. After moving to Germany in the Summer of 2003, Tabitha was involved in various projects including jazz, gospel, modern classical music and rock. Starting in 2015, she began recording music which combined these influences. The latest two CDs bring together various aspects of Tabitha's style. Rock, blues, soul, classical and jazz meet in a retro future where all are one.

Where did your interest in Indie/Retro-Nova/Soul-Rock sprout from? It's a genre you don't see often!

I have lots of different influences. I grew up in an area with lots of hip-hop, soul and R&B music, plus latin music from the Puerto Rican neighbors! My parents only listened to classical music, my older brother listened to rock, jazz and reggae and my sister got into country-rock, folk-rock and Americana. As a student, I lived in a Dominican neighborhood in Manhattan, played jazz in the college jazz ensemble and wrote my own indie music. Eventually, I started experimenting more and more with combining these influences.

Who are some of your musical influences, why?

I grew up listening to everything- Prince, U2, punk music on college radio (WPRB in Princeton), then got into jazz, blues and hard rock. I listen to everything from Bessie Smith, Led Zeppelin, Patti Smith to newer music like the Espers, Regina Spektor and Duffy. I still love hard bop jazz (Horace Silver is my favorite jazz composer/ pianist). When I need to chill out, I listen to Jazzanova, Beethoven or Celtic music. It all depends on my mood. My influences as a songwriter are all of the greats- Leonard Cohen, Bob Dylan, Bruce Springsteen, Neil Young or female singer-songwriters like Suzanne Vega and Joan Osborne. I love it when a song sets the mood and tells a story.

Tell us about Upside Down World, which you released under Mind Guard Records!

This CD really took a lot out of me! I was going through a turbulent time in my life, and you can hear the emotion in my voice when I was recording. Also, the themes I write about- love, death, war, spirituality- are not easy to sing about. You really have to allow yourself to be emotionally honest and raw. The process took much longer than either I or my producer, Steffen, thought it would, and then there were problems with shipping because of customs!

Some of these songs were written back when I was living in New York, and others were not yet finished, and needed polishing. I tend to work best alone, so I made demos of my songs and sent them to Steffen. Then we had to sometimes change the arrangements, change the vocals, etc. I played most of the instruments myself, but got some help from the Fiverr.com website.

Which song would you say was the most challenging to write/record?

Candyand was written out of a sense of urgency, because of the political situation in the Middle East, and the war propaganda. I found that I had written a song that is not easy to sing!

Which song do you prefer to play live? Why?

"Upside Down World" because it has easy chords. (laughs). That and the fact that it is a socially critical song that is also funny and light-hearted. I found out later that this is a popular hash tag.

When you aren't writing, or performing, what takes up your time?
I have been learning ancient languages- Latin, Hebrew and Greek. I also love traveling, and I am not yet finished with that Bucketlist. Perhaps I'll climb Mount Kilimanjaro sometime. If I had more time, I'd spend it cycling or hiking with friends, but it seems that my schedule does not permit it right now.

"Only Your Love Will Do" Single is released!

Finishing touches, including mixdowns, put on CD, as Tabitha premieres the new tracks at a house party.